- Added the famous "Vampire Killer" soundtrack, which is the correct one for this game and stage, replacing the previous one. A great Paula 4 channels rendition by the talented musician Estrayk/Capsule^Scoopex, based on the original by Satoe Terashima.

- Press and Hold attack button to throw knives (when available), for those who don't have 3 buttons CD32 compatible pad.

Could be the next project after Green Beret.  It's a huge gaming franchise with massive fan base and people have very high expectations, so its fate is uncertain while I remain "one-man development team".  Konami had large and professional (full time) staff to develop the original Castlevania games back in the day and they took their time for each release.  While on the Amiga, where the norm was one programmer and one artist doing everything in extremely tight release schedules, results were mixed for big games (with a big name) like this.

Today we got great modern tools like Scorpion Engine (used here) and it helps a lot (this wouldn't be feasible at all without it).

**THIS IS NOT CLAIMING TO BE A 1:1 PORT OF SHARP X68000 game at any point. That was a computer costing the equivalent of ~US$6,000.00, several times the price of your typical Amiga back then. **  The point is to show what we could have if we embrace slightly higher minimal specs  rather than demanding everything to be OCS/512KB Chip.  Could it be done to run on stock A500? Perhaps, but that will demand a near full time ASM programmer + artist + musician over the span of 1+ year.

**Bear in mind that just a couple of years ago, games done with AUTHORING ENGINES required 68030+FastRAM to achieve this performance.**  To have unaccelerated machines (A1200 here, and A500 for Green Beret) running it, is a big victory for Scorpion Engine.

What is in this demo? The whole level one, with its sections (1-1, 1-2 etc) right up to the boss, which can be destroyed and drops an orb.  The basic "framework" for the game is set:  main character has whip and secondary weapon picked along the way (knife in this prototype), gets 'hearts' for mana by destroying candles, I think that I've included all level 1 enemies (except that huge floating eye), enemies have functions (red ones can jump out of the water and shoot at you) etc.

THINGS THAT IT DIDN'T HAVE:  the soundtrack obviously isn't correct, the bgm is "Bloody Tears" which is from Castlevania II: Simon's Quest and not "Vampire Killer" from Castlevania 1 like it should be. But this will be rectified as soon as a musician offers help (credits to Drillimation for original arrangement, that I used for this Protracker 4 channels conversion).

Ladders may feel odd, they don't work like in typical Castlevania games, they work more like the ladder in the Mega Drive game "El Viento".  Summing up, it lacks the other levels and bosses, the other weapons and stuff you pick, and so on, but I'm pleased with the results so far. It plays well. Worth saying that doing AGA game (2MB Chip) is infinitely faster and easier to do than squeezing a game like Green Beret (which may look simple at first glance) on the 512KB ChipRAM OCS A500.

Download it, and unzip to your Amiga's hard disk or SD card.  Inside the CastlevaniaAGA_PROTOTYPE folder, you'll find game-crunched.exe icon.

HOWEVER, I wasn't able to run it from Workbench, I had to do the old trick of Reset, then quickly Hold BOTH MOUSE BUTTONS for the boot menu to appear. Select BOOT WITHOUT STARTUP... 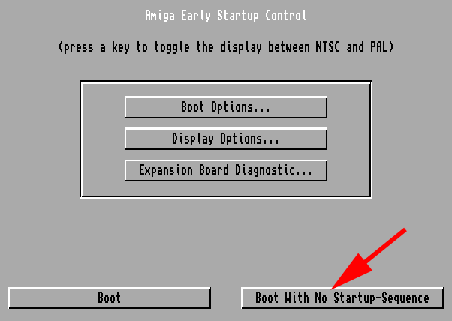 Work:  (or equivalent name of the partition that you saved the game)

This last command will load the game. SPACE on the keyboard throws knife (when available). Also GREEN on CD32 pad does it. Button 2 on a gamepad jumps, but pushing up jumps too.

This doesn't fits on a 880KB floppy and Scorpion Engine currently has no support for more than one disk and disk swapping.

Will you also make a CD32 conversion ? There would be the possibility to play the audio tracks from CD.  And C. has a damn good soundtrack.

Thanks for your message and support. Last time I've checked, Scorpion Engine didn't supported CDA tracks yet. But that will be great when or if it does, because you know, this is also known as Castlevania Chronicles on PS1 with that sweet CD soundtrack.

I know Castlevania Chronicles, of course. I even played it on the PS1 back then. My favorite part is Symphony of Night. I think their AGA version looks even better than Chroinicles. Well maybe this is possible with the CDA tracks in the future. The CD32 even offers the possibility to save game saves in the NVRam. Earok is an expert in this area. He could certainly help.

I hope they finish the project, a good Castlevania port is missing from the Amiga.

Maybe Roland MT-32 support for midi music would be an option as well?  The x68000 has a great midi soundtrack :)

Any new demos coming for this one?

The plan is to have some news or a new playable version on Halloween (October 31). :) But I can't 100% promise yet, as there are some factors outside my control. But anyway, thank you very much for the interest in this game.

Thanks! I work for the ZZAP! AMIGA magazine, so we try to cover the game (news or demo on our covermount). Is there a way I can get in touch?

For loading from Workbench. Try putting the WB1.3 FastMemFirst command in the startup-sequence, and then it means you get the full 2MB chip for games. When making the launch icon, remember to increase the memory stack value.

This, ofcourse, is awesome!  On a personal level I would prefer MSX2's 'Vampire Killer'  over the game-layout of ' CastleVania'  though. But hey some people are never satisfied.. Anyways, Looks brilliant already!  :)

Hello, that's really great! I would also donate to your work. Best wishes!

Thanks for your great videos.

Release had a small "debug" number left in the place of stage number.

I've removed that, download the same file again and that'll be fixed.

Have a great Sunday!

would it be possible for you to implement some basic keyboard controls?

Possibly, in the same way I already did the Space Bar to work. I had MSX before Amiga and most people happily played on MSX keyboards back then, which usually offered excellent arrow keys.

Thanks for this. Game feels great to play. I made a video on my channel about it https://youtu.be/R0ImHob093U

Someone can make an HDF file for emulator?

Hell yes, finally a new port. I hope you add a save option or password system. I think there was one in the original Japanese.

It's great, please Continue this, I would donate something for such a great Amiga Game.

Hmm, I'm getting issues trying to play the game. I boot with no Startup-Sequence, as indicated and try to run game-crunched.exe and get the error message "Please insert volume ENV in any drive". 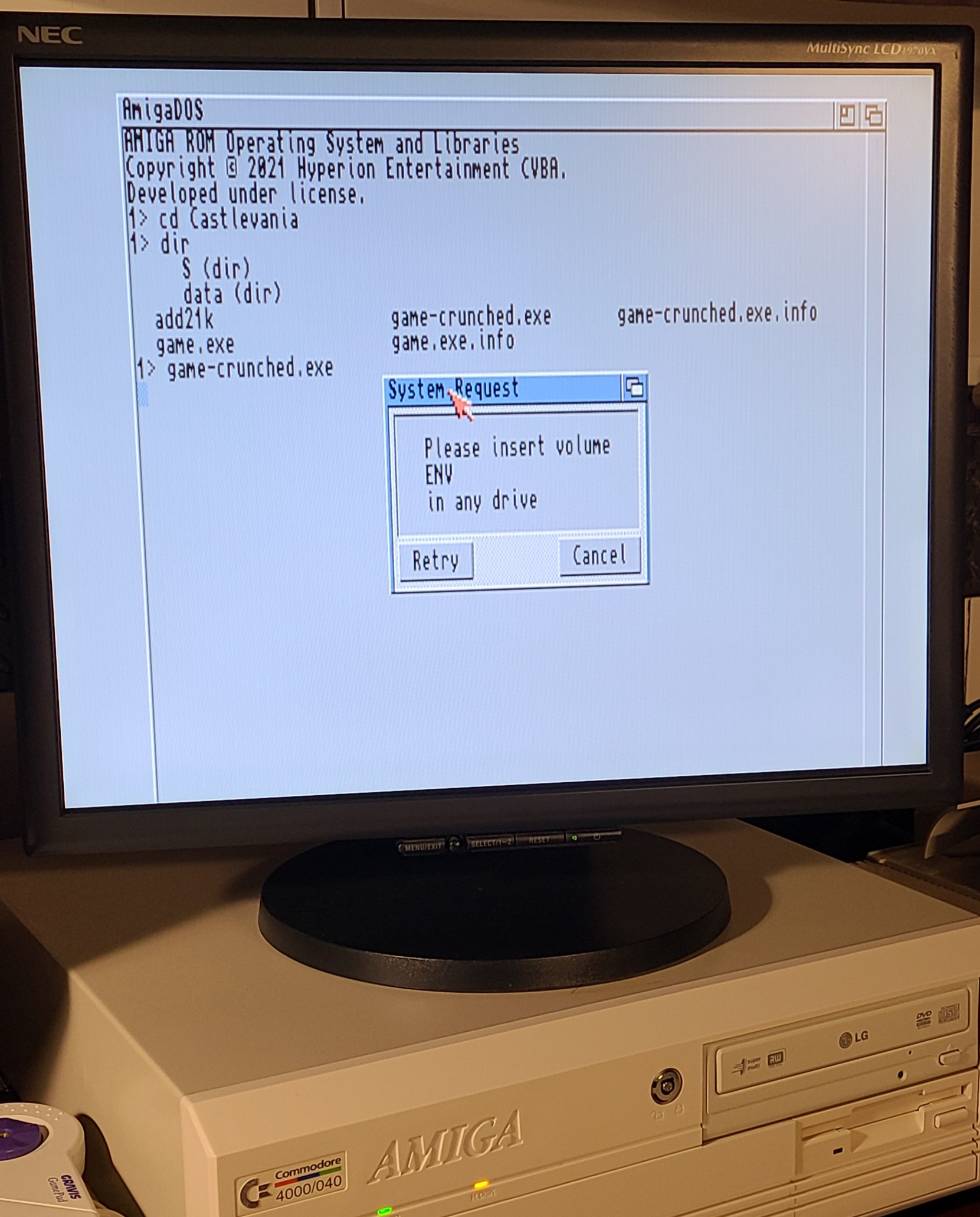 I've seem there before back in the day. Click on Cancel in that pop up enough times for it to go away, then you can type. Type ASSIGN ENV: RAM:

That will tell that ENV to go somewhere (to the RAM) and it will not bother you anymore.

Type game-crunched.exe again and it may work!

If not, try to type game.exe instead.

Sorry for the long procedure but that's how prototypes are, and thanks for downloading it anyway!

Looks great, hope you continue with this !